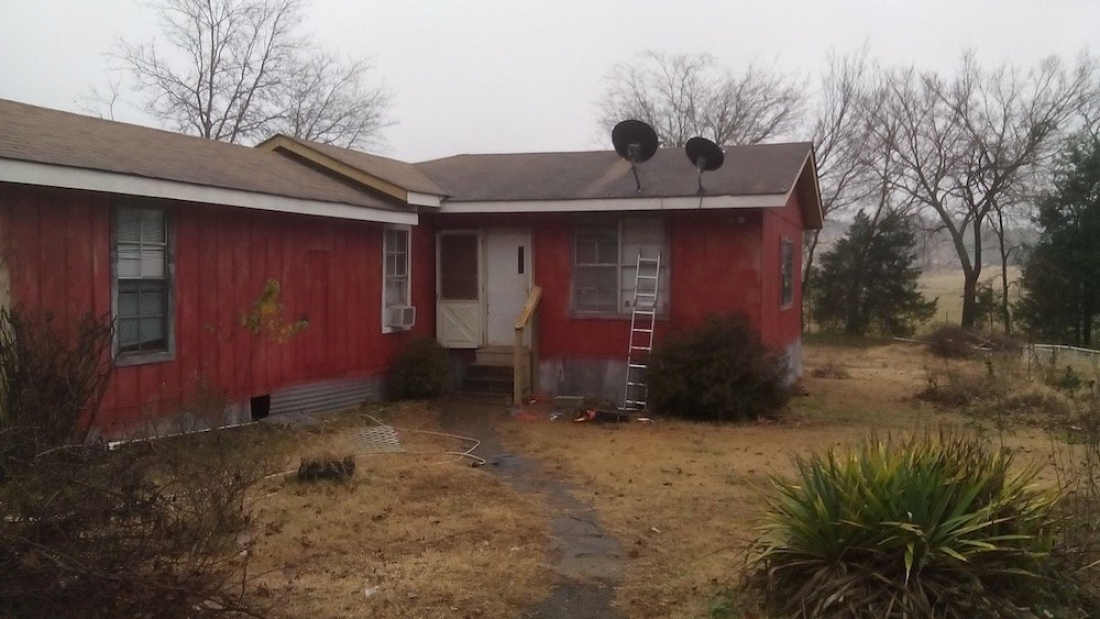 We moved here to little Withers, Arkansas because the price was too good to pass up. We had been looking for a nice, secluded chunk of land in Texas, but damn the prices in Texas are high. This Arkansas place showed up in a Craigslist search for North Texas. The pictures looked nice – an old mobile home on two green acres – and the price looked even nicer. We figured, if we’re willing to drive all the way up to North Texas to look at a place we might as well tack on a couple of more hours and check out this place in Withers, Arkansas.

It was a ten hour drive after adding a few necessary stops to the eight hour Google Maps estimate and we pulled into Withers later than I’d hoped. The sun was sinking and I didn’t want to wait until the next day to give the place a once-over so we drove straight to it instead of checking in at the motel first. We drove right down the main strip through Withers, passing the single traffic light in town, and straight on out of town for seven miles, turned off the two-lane highway onto a dirt road then after a short jog took another left onto another dirt road and there it was.

The old single-wide mobile home appeared structurally sound, but it was essentially unlivable. Most definitely a “fixer upper” to be kind. Many of the windows were busted out which had let various critters inside for who knows how long. One room’s ceiling was almost completely covered in dirt dobber nests. The floor was soft in several areas, the plywood having rotted out. Worst of all, every bit of PVP plumbing under the house had ruptured during a freeze. In fact, we later found out that there was over $400 left owed on the property’s water bill, meaning the pipes had burst and free-flowed for who knows how long. Still, the price for the whole deal was so low that even with the cost of getting the mobile home livable we’d still be ahead of the game financially.

The wife and I put the bulk of our stuff in storage and stayed in the Coachwhip Inn Motel in Withers while getting the mobile home into a livable condition. I worked my regular job – that of a marketing manager for a big online auto parts company – from the hotel for half the day, then we’d head up to the property to rip out floors, replace windows, clean up whatever messes critters and left behind, and other such work. We left the plumbing to the pros and had them install PEX plumbing, which they had successfully uphold me on. Easy upsell, really. After seeing how those old PVC pipes had been shredded in winters past I was pretty eager to have pipes that would expand instead. It took about two weeks before we were able to move out of the Coachwhip Inn Motel and into the mobile home.

I was carrying in a box of dishes when a truck came down our little dirt road. It was the first time I’d seen anyone on our road since we’d bought the place. The gray Ford rumbled past and I gave it a nod with my head since my hands were full. It didn’t slow down but kept moving, kicking up dust behind it. It was then that realized I’d never gone any further up that road and I wondered where it might lead. A short while the later the gray Ford came heading back down the road, back toward Mount Peabody Rd. except this time it stopped in front of the house, as I was just stepping out to grab another box to bring in. The truck’s driver side window rolled down revealing a heavy set middle aged guy in a weathered and faded baseball cap. “Howdy,” he said.

“Hey there,” I said approaching the truck. “How you doing?”

“Moving in, huh?” he said, nodding toward the house.

“Yeah, finally. Took forever to get the place fixed up.”

Jim chuckled a bit and said, “I’m surprised you were able to do it! It’s been sitting empty so long I figured it might turn to dust before somebody bought the place.”

“Well, that’s sort of what the previous owner said. He said he’d been renting it out, but after moving away for a new job it became too much of a hassle to keep up with so when the last tenant moved out he pretty much just ignored it and then decided to sell a few months ago while the home might still be salvageable.”

“Looks like you got it in the nick of time, then.” He then pointed toward the ranch behind the house and said, “That’s my Daddy’s ranch right back there, but most of the cows are pretty much all mine.” He then pointed back down the dirt road with his thumb. “Back there is where I put out feed for them sometimes, so you might see me driving by every week or so. You won’t likely see anyone else, though, that road dead ends up there so me and maybe my Daddy are really the only people who ever go up there.”

“Yeah, the road used to keep going, meeting up with Highway 80, but a tornado tore through here, oh, about ten years ago I guess. Just being an old dirt road that didn’t get used much anyway the county just left all the debris there instead of spending the money to clear it up and it eventually grew over so thick with brush it’s pretty much just a dead end now.”

“Yep. Tornados are about as interesting as weather gets!” he said and we both laughed. “Alright, well I’ll let you get back to moving in, Mike.”

“Well, I’m not sure if I should thank you for that or not,” I said and we both laughed again. “Stop by any time.”

“Will do,” he said, then rolled up his window and headed off.