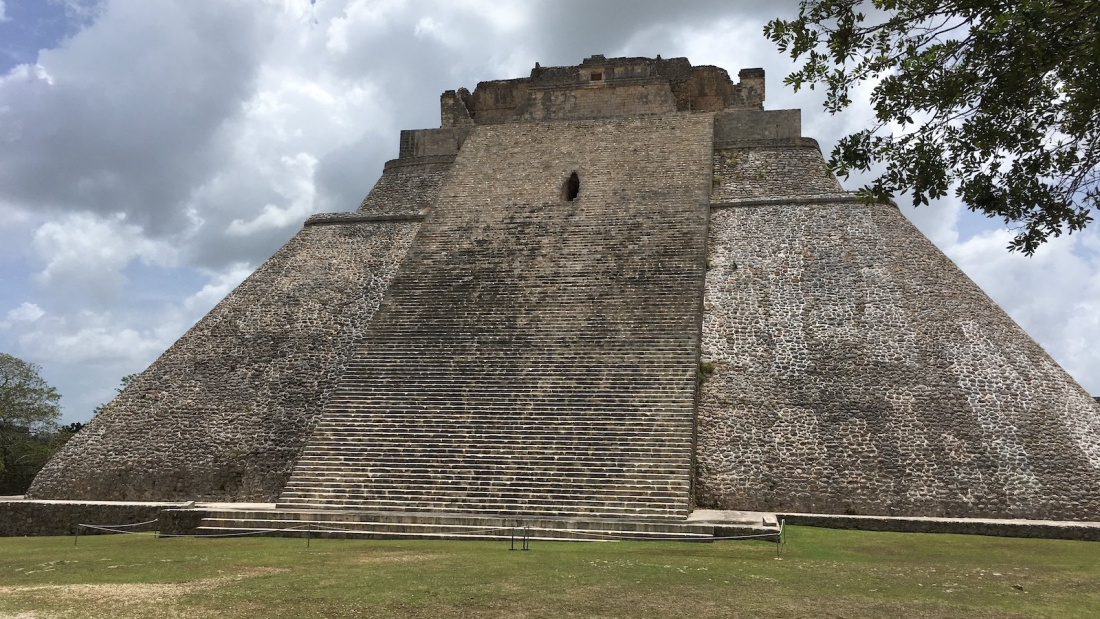 Just like Indiana Jones (except without the whip, gun, leather jacket in 95+ degree heat, and rugged good looks) we traveled a long, treacherous jungle path to explore the mysterious ancient Mayan city of Uxmal. Actually, the path was pretty much strait and well-paved and the bus, I must say, was simply comfy with a freezing A/C and a constant stream of upbeat Latin music.

There are many ways you can get to the Uxmal ruins from Merida: Tour bus, taxi, Uber, bicycle, feet, crab-walk, etc. We chose to take a bus. Not a tour bus. Just one of the normal buses that depart from the Terminal de Autobus throughout the day toward many destinations near and far. 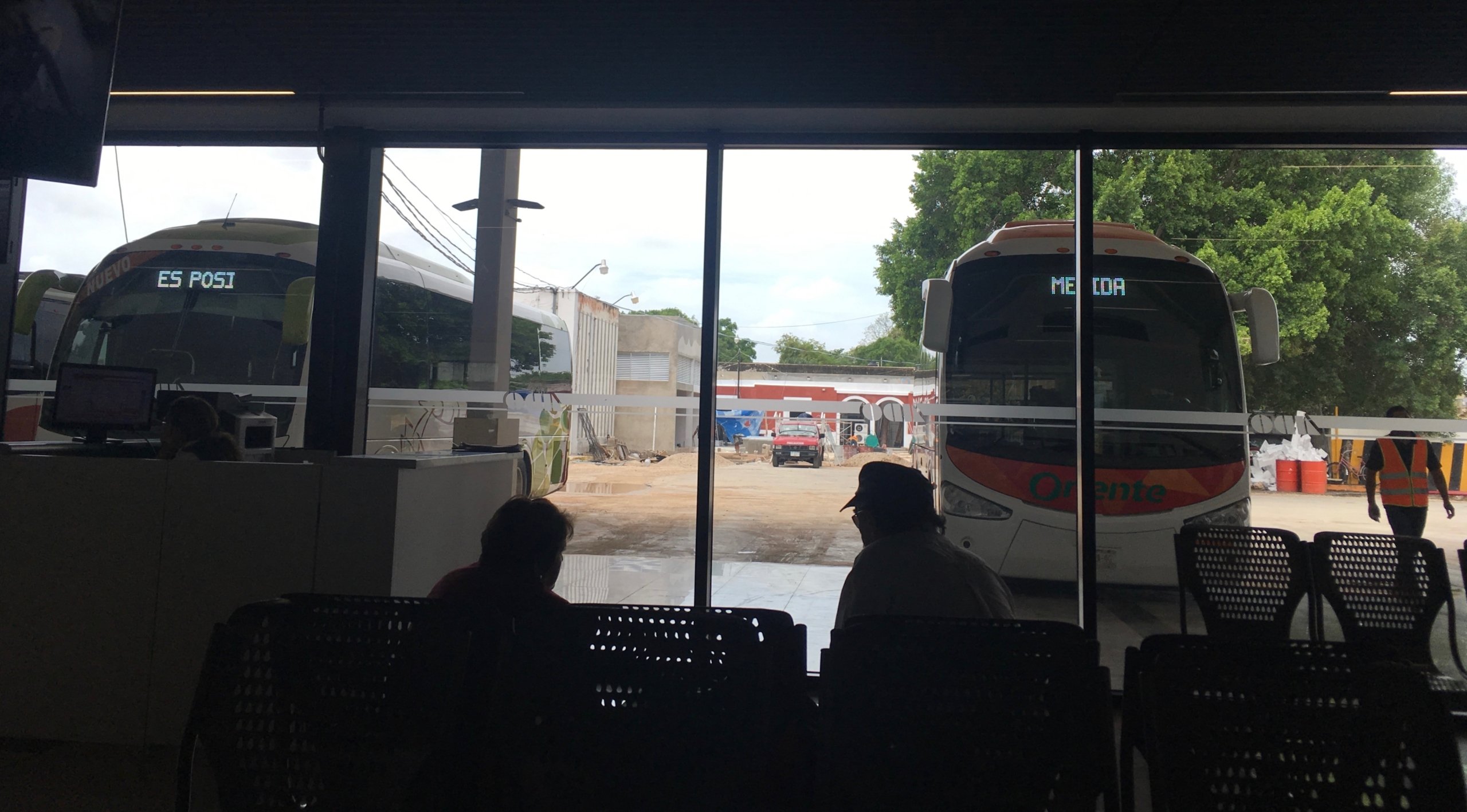 Waiting for the bus to start boarding.

As I mentioned already, the bus was quite nice even it was, technically, a “second class” bus. Our round trip tickets cost $21 for all three of us. The trip took a little over an hour as it picked up and dropped off a few passengers along the way.

When we arrived at the Uxmal entrance center we purchased our tickets, walked through a short open lobby / snack vending area, through a turn style, down a few stone steps and BAM there was the Pyramid of the Magician! They don’t waste any time getting you right to one of the most magnificent structures there. I expected to walk a meandering path through some rubble and various small scale structures on our way to the pyramids and larger structures, but nope, you are pretty much dropped right into ancient awesomeness. And awesome it is! All of it. The scale is certainly something to behold, and mere photographs of the Mayan ruins don’t accurately relate the impressiveness of the site as experienced in person. Never-the-less, I’ve dumped a huge gallery of images below. Added bonus: the place is teeming with I’m

iguana. Several times one of us would almost trip over one. 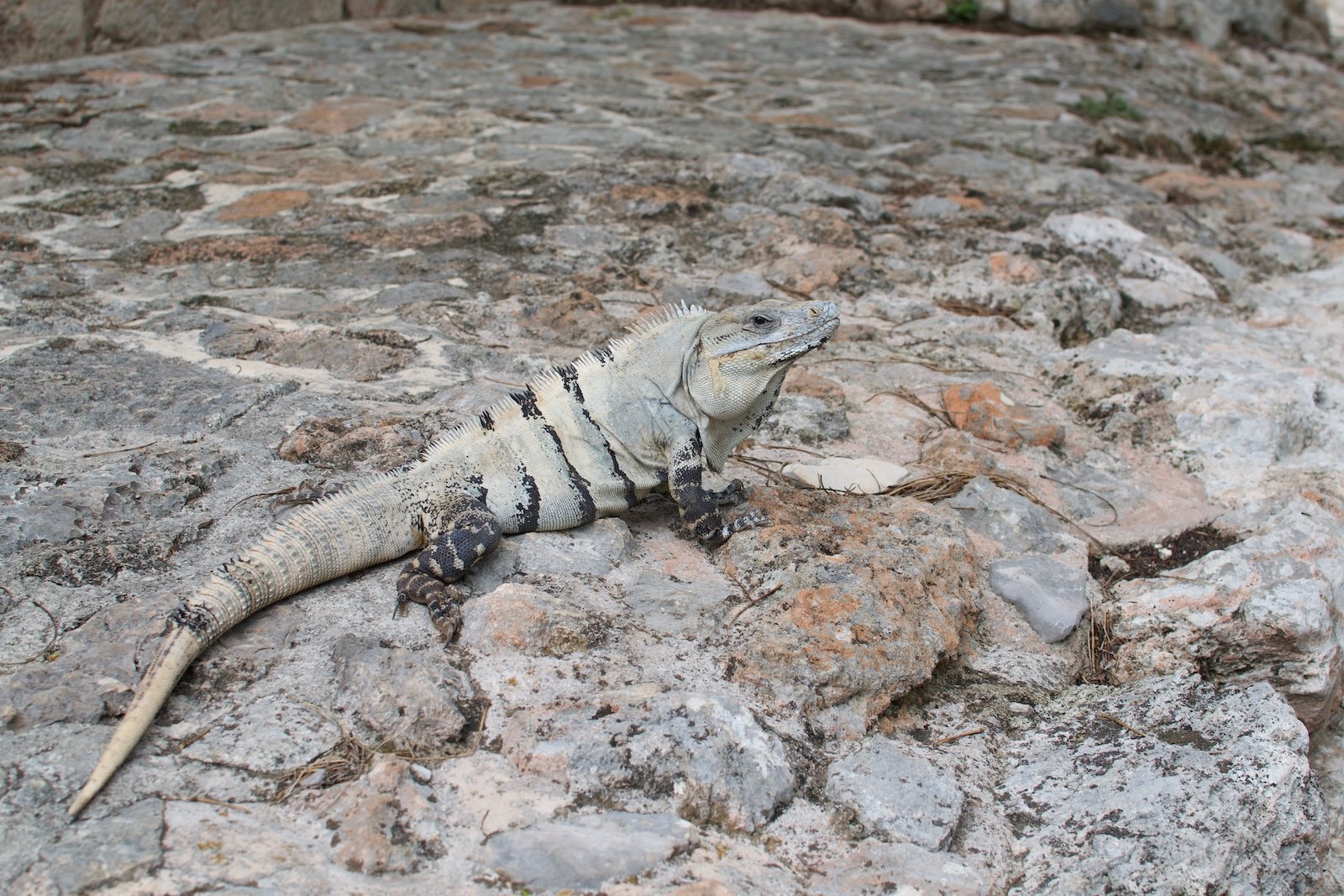 I’m an iguana. I’m nicer and more useful than a cat!

We spent about an hour roaming through the ancient city. Surprisingly, it is both vastly huge and rather compact. While the structures are monolithic, the distances between them (and oftentimes UP them) are pretty quickly traversed. Just as we wrapped up our tour of the ruins and began heading back to the bus stop for our return trip, it began to rain. And then it began to rain more. And more. Luckily, being prepared (just like Indiana Jones!) we whipped out our three umbrellas to stand waiting in the rain by the highway for us bus to return. Not as lucky were two people standing next to us without umbrellas getting soaked. Very un-Indiana Jones of them! One was a young woman from Canada, the other a young man from Germany. We offered them one of our umbrellas and then stood there waiting for the bus, the wife I sharing an umbrella, The Canadian and German sharing an umbrella, and Levi spinning his umbrella randomly for “fun” forgetting each time that doing so would fling a torrent of water directly in our faces. I’m considering revoking his Indiana Jones status for this.

The bus ride home was comfortable and freezing. I’d thought the A/C had been cold on the way there, but on the way back – soaking wet – the A/C was comparable to that of medical grade technologies for freezing tissue samples.