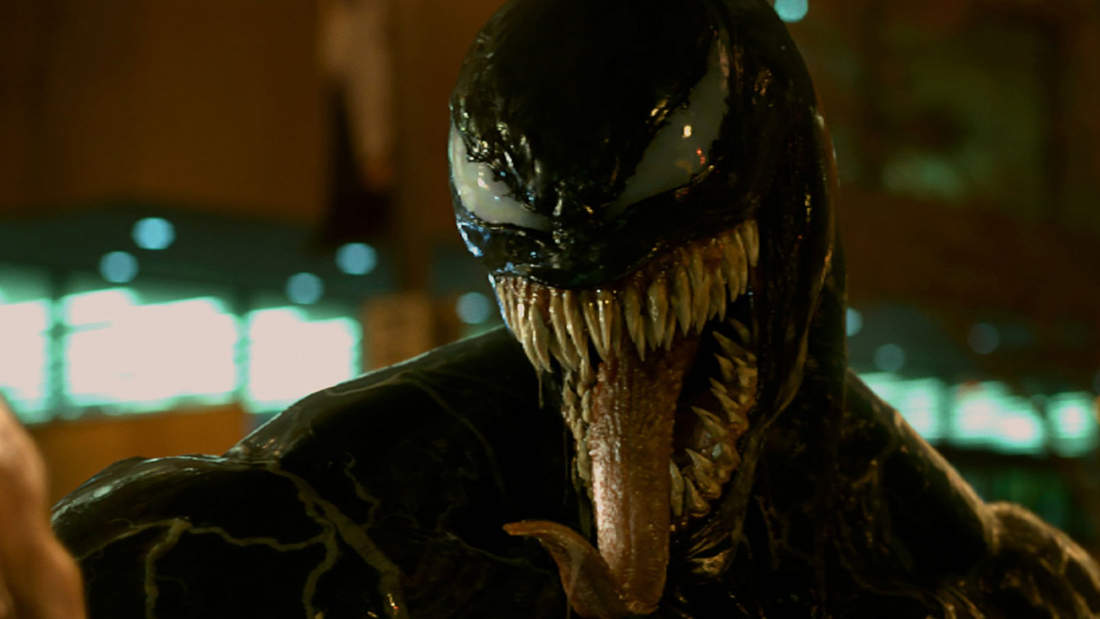 We are going to write a review of the movie Venom starring Tom Hardy. We will tell you know if you should go see this movie or not and then you will do what we say. Is that clear? Good. Go see this movie or I will bite your head off. It’s pretty good.

You’ll have to excuse my symbiote. He can be a bit overbearing at times. YES YOU CAN!! NOW SHUT UP AND LET ME DO THIS REVIEW!!

Anyway…yeah, Venom is pretty good. It is a movie about a gelatinous alien being that can only survive on Earth while in a symbiotic relationship with an Earthling host. In Venom the alien, or “symbiote” as they are called and whose name IS Venom, inhabits Eddie Brock (Tom Hardy) an investigative reporter. They learn to live together and have merry adventures while biting a few bad guys’ heads off. It’s a lot like that old movie The Odd Couple.

I’ve read some low-star reviews of it complaining about a few things, such as it having no cohesive “feel” to it – it starts as a horror then turns into some sort buddy comedy – or that the action sequences aren’t that well executed, or that CGI isn’t all that great. There is some truth to some of that, but nothing like a deal-breaker for me. Overall, I think it flows pretty well despite shifts in tone. I’ll take these in turn…

To say that it starts as a horror is a bit over doing it. It starts in a dark and serious tone, sure, but it definitely feels like a comic book movie kind of dark and serious. It’s more Men in Black than Alien with how dark the beginning is.

The action sequences are a bit lackluster and full of cuts. I’ll grant that, but there’s definitely been worse jobs and they, at least, do a good job of maintaining pace.

CHECK OUT:  Daisy: A Love Song from Gatsby

The CGI is very glossy which does make it look a bit “old fashioned” sometimes. Remember back when CGI could pretty much only make very smooth, glossy surfaces and liquid textures that hardly looked like they fit naturally into any realistic environment? It was reminiscent of that at times. For the most part, it’s not really all that noticeable unless your an idiot like me and staring too hard at the screen because you know you’re going to write a review later, but there are a few moments during the finale were there is so much CGI goo flying around that it’s hard to know what exactly you’re looking at or to not have a seizure.

There are a couple of major developments in the movie that happen a bit too quickly. I’ll detail these int he spoiler section below, but for you non-spoiler folk just be aware that there at least two major developments that are extremely rushed. You’ll probably realize what they are when you see the movie because you will find yourself thinking, “Wait…what? That seems like kind of a big deal, but okay…”

Overall, it’s a fun movie with some really good humor and a steady momentum. We really think you should go see it.

The rushed stuff mentioned above are these: