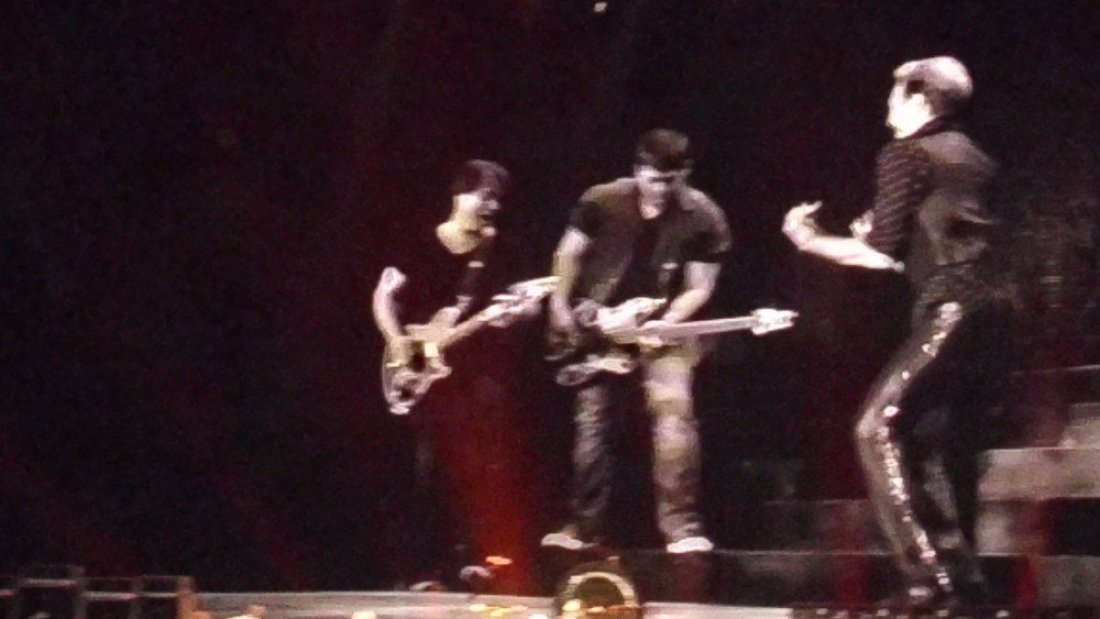 I saw my all time favorite band of all time (in the whole world, too) in San Antonio last night: VAN HALEN! Here’s some pics and below that a kind of review. . .

In lieu of writing a true review, I’m just going to paste these comments I posted in reply to a Facebook question my pal Jon asked me about it.

So on a scale of 1-10, where was the VH show last night? Eager to hear your review of it.

I’d easily say it was largely 8-9 with some points reaching 10. There was this one bit where DLR was on stage playing guitar alone and talking about his two sheep dogs while they played footage of him and his dogs on his farm herding sheep around that was so personal and cool that it was like sitting in a giant living room with DLR and 10,000 people watching home movies.

Eddie, of course, didn’t miss lick or a beat despite being the first tour he’s ever played sober and apparently so wracked with stage fright before every show that he pukes his guts out. Wolfgang was amazing on bass. I think his note-to-note ratio to Mike Anthony was like 10 Wolf notes per 1 Mike Anthony note…the kid is rock steady when needed and then walks over the bass fretboard like a lead guitar player.

Were they as spry as they were 10 years ago? Of course not, they’re in their late fifties, but even so DLR pulled off a handful of splits and jump kicks…and I’m not sure what sort of shoes he had on, but he kept running and sliding around on the stage like a kid wearing socks on the kitchen floor.

The rapport with the crowd and each other was genuine and conversational with plenty of laughs.

The set list was comprised primarily of VH material pre-dating 1984…much of it obscure stuff that only rabid fans like myself and my buddy Jarrett Brown who was there would recognize.

It was a very stripped down performance. Other than having a big screen behind them, they basically just played music…guys with instruments…no explosions, high wire stunts, choreography, etc.

Only during the encore – JUMP – did we get some real arena rock theatrics as two canons blasted confetti all over the place and DLR ran around waving a giant flag.

And I should not forget to mention that…KOOL AND THE GANG WAS EFFING AMAZING!!

I suppose the vibe of the VH show very much matched the vibe of the new album and all the content around that which is “Here we are doing the kind of VH you like because that’s what you want to hear and by God that’s exactly what we want to play for you! So let’s have some fun.”

DLR’s vocals…just when you’d think “Well, DLR’s not the best singer in the world, but so what…he makes up for it spades purely in personality,” he’d then launch into several phrases of amazing vocal range and acrobatics that you’d have to do a double take.

Admittedly, I’m a little biased. They could have just farted on stage and I’d probably rank it a 7.5 show.