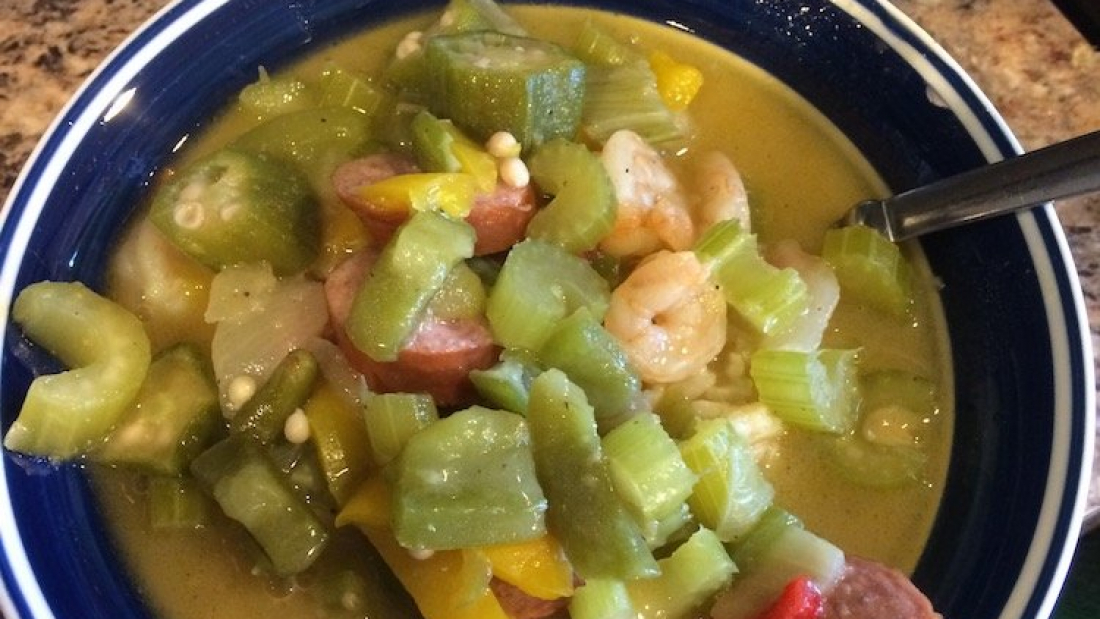 I don’t mean that I made Gumbo that was exceptionally good, although it was. What I mean is that I made a version of Gumbo that was augmented in such a way that it effectively became something better than Gumbo…something like Gumbo v2.0. But first I had to make regular Gumbo.

The day before we had eaten at a New Orleans style restaurant in Fort Smith, Arkansas called R. Landry’s New Orleans Cafe which was absolutely fantastic. I ordered the “Taste of New Orleans” dish which contained enough food to feed a paddle boat full of starving Cajuns. It contained crawfish étouffée, red beans & rice, corn, french bread, and…delicious, delicious gumbo! That’s when it happened. I was bitten by the gumbo bug and could think of nothing more than gumbo.

So the next day I made gumbo. I had never made gumbo before but I found a simple gumbo recipe by Hillshire Farms on AllRecipes.com. The only change I made to the recipe was to add a few cups of water to it (I wanted it more brothy than thick) and I just used pre-cooked frozen shrimp instead of raw. It was a massive success. I loved it!

Here’s where things get crazy. Super crazy. The same night that I made the gumbo the wife decided to slow cook several thick pork chops, which were ready by morning and were…my salivary glands are throbbing as I type this…amazing! Then, like some sort of culinary mad scientist, I added shredded pork chop meat to my gumbo. Super Gumbo!

NOTE: The featured image is of my regular gumbo, not the super gumbo. The super gumbo did not last long enough to be photographed.