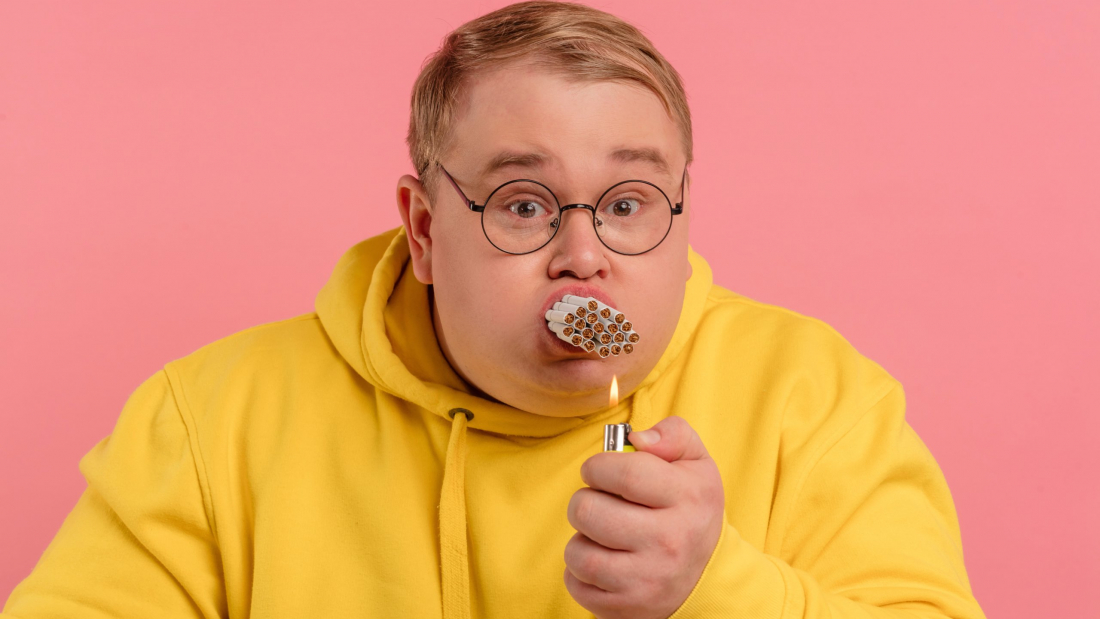 This was originally published in an issue of the Austin-American Statesman newspaper’s XL Ent entertainment magazine on July 24, 1997! You’ll be happy to know that I did eventually quit smoking. Now I simply freebase entire packets of nicotine gum.

I have come to the decision that I will never, ever, never smoke another cigarette for as long as I live unless there happens to be one near me. The reason I say this is because cigarettes are very unhealthy. I can tell by what they’ve done to my bank account. Thanks to the unhealthy nature of cigarettes, I cannot afford to buy such important, life-sustaining items as food, shaving cream and Budweiser. This simply cannot be good for me.

In addition to this, I’ve heard that cigarettes can actually make you sick after a few decades of use. This is very disturbing. What smoker can afford to be sick? I, for one, know that if the day ever arrives that I do become seriously ill due to smoking, I won’t have enough money lying around for Make The Black Polyps In My Lungs Go Away Pills because I’ll have gone to Sam’s the day before and bought out their entire supply of unfiltered Marlboro Reds (Now with 80 percent more of those tasty carcinogens you love!)

The problem is that it’s easy to start smoking but hard to quit. In the old days, cigarettes were much safer. But lately they’ve become lethally habit-forming killers. Just look at the difference between the Surgeon General’s warnings of yesterday and the ones of today:

Yesterday: SURGEON GENERAL’S WARNING — Scientific studies have proven that smoking is not only very cool but also extremely good for you. Besides, everyone is doing it. Why aren’t you? You want to be cool too, don’t you? Come on, give it a shot. Smoking is also part of your complete breakfast.

Today: SURGEON GENERAL’S WARNING — Smoking will give you cancer, emphysema, Irritable Bowel Syndrome, acne, crabs, Ebola Zaire, the Black Plague, and your penis will fall off. In the event that you light one of these cigarettes, armed members of the ATF will break into your home and convert your kneecaps into a fine powder.

So you can see why I need to quit smoking.

The problem is, I enjoy it. I enjoy the rush. I enjoy the taste. I enjoy the way I can’t make it up a flight of stairs without the help of a nurse and three tanks of pure oxygen. And what’s so bad about a few black lung polyps anyway? They build character!

Haven’t you ever noticed one of those veteran smokers about 900 years old with one of those breathing holes poked into their throats where a tube of oxygen is supposed to go, only they have a cigarette hanging out of it? Haven’t you said, “Boy, look at that guy! He’s got some character, I’ll tell you what!” No, of course you haven’t! That’s why smoking is bad for you. And it’s also bad for others when you factor in what some whiny, self-involved people who probably go power walking call SECONDHAND SMOKE.

Secondhand Smoke is a serious issue in America. It has single-handedly destroyed the ozone layer, depleted the rain forests, caused a giant comet to crash into the Earth and kill the dinosaurs, and caused many fine restaurants to smell like the inside of my car. This is why people who do not smoke never ask me for rides, and it is also why they have banded together in large, health-conscious mobs to rid the otherwise harmonious world of smoking sections. With this I agree, because anyone who can’t make it through a meal without a cigarette is someone who really needs serious help.

But the reason there is so much secondhand smoke floating around is because cigarettes are extremely addictive. Many well-learned scientists, the same ones who discovered that rare meat will make your arms explode, have found that nicotine, a narcotic that forms naturally in cigarettes via factory manipulation, is very addictive.

However, anyone who claims that cigarettes do not contain nicotine and that nicotine is not addictive obviously has the mental capacity of a pair of pliers. Nicotine is not addictive in the same way that brain surgery is not a little complicated. Take it from me, I’m so hooked on nicotine that if it were available, I’d buy it by the gallon just to take baths in it. And so would many of my friends (NOTE: We would not take baths together).

So what can we do? Well, quitting smoking might help. A lot of people seem to think that this is a hard thing to do. They drone on and on about how they quit smoking one day, for about 17 minutes, but due to serious withdrawal symptoms (such as pacing the floor until they were knee-deep in building foundation), had no choice but to tackle the first person they saw, like a rabid pit bull on PCP, and humbly beg for a cigarette.

Luckily for these poor folks, I think I’ve discovered a method of quitting smoking that just might work. Like myself, most people who smoke have linked their habit to other actions they commonly perform such as driving, reading, blinking, converting food into energy, etc. Therefore, the proper course of action is for all smokers to throw themselves down a flight of stairs and fall into deep comas. This would work, really. The only drawback is we would then be left with a smoker-free society.

There’d be no one to burn holes into the driver’s seats of America’s cars. No one to set afire our nation’s major parks and forests. No one to singe the eyebrows off my face because my lighter had somehow been set to the Nuclear Napalm Death Gun level, wherein the flame shoots higher than some top secret military aircraft can fly.

I think you can see where I’m going with this. There is no way in hell I’m going to quit smoking, unless I start coughing up charcoal briquettes. In fact, in the event that a tobacco warehouse ever became engulfed in flames, with many women and children trapped inside, I would have no choice but to burst heroically into the inferno with a lawn chair and a case of beer and wait until the women and children had put the fire out themselves. But in the meantime, I’m going to take inventory of my black lung polyps and see how much character I’ve built today.