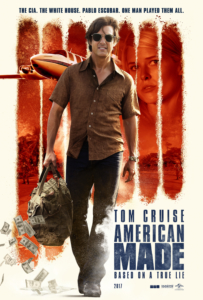 The kid spent the night at a friends house, so the wife and I had the chance for the first time in a million years to watch a grown-up movie together and this was it…

Great flick! Perfect? Nope. Good, sometimes really good? Yep! Definitely a fun ride. The camera work gets in the way a bit. It’s pretty obvious when they are trying to catch a frenzied situation because the camera work shakes and rapidly zooms in or out. Not an uncommon technique these days, but is executed a bit clumsily in this movie at times.

Also, I must say I was surprised how much this movie took place in Nicaragua and Mena, Arkansas. Not only did my family live in Nicaragua for a year, but when we moved back to the states we ended up living for 3 years in Waldron, Arkansas which is about 25 miles north of Mena.

Copyright © Clif Haley Megacorp Consortium LTD, a division of Globochem Industries Intl, LLC. All rights reserved or something like that.