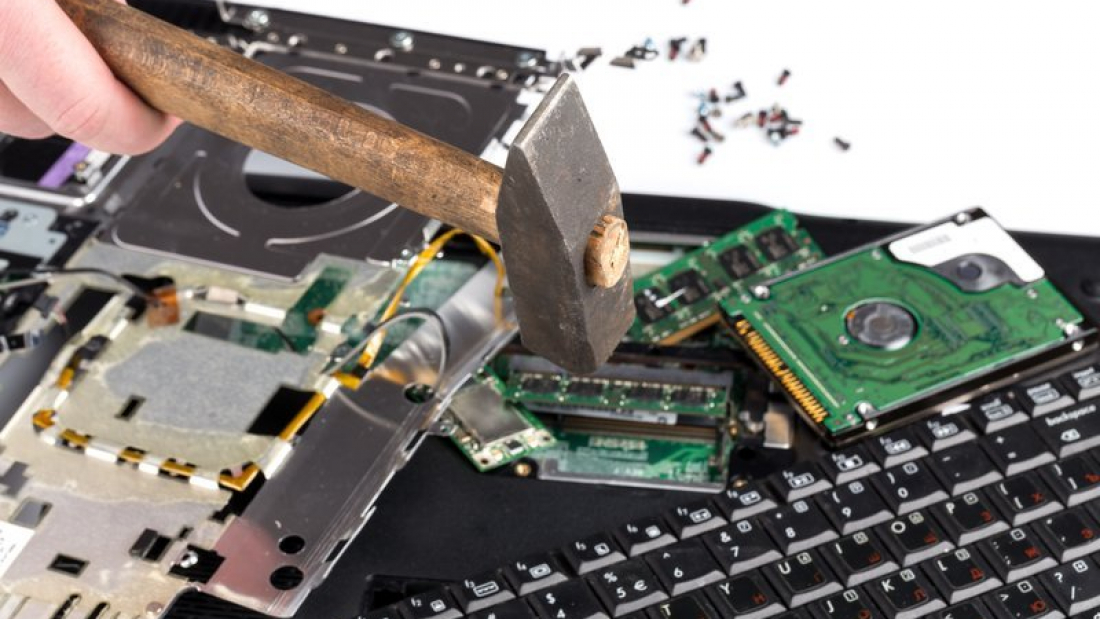 Science never ceases to amaze me. Why, just the other day science amazed me by making my 11-year-old son’s computer almost impossible to upgrade. Thanks to the impressive strides in the miniaturization of computer components made by science, attempting to upgrade the hard drive on my son’s laptop was tantamount to performing vascular surgery with salad tongs.

I had purchased it for myself from Walmart several years ago and it was the cheapest available laptop at the time making it an immediately regrettable purchase. After getting it home I unboxed it, turned it on, then sat down and watched the entire Godfather trilogy while it booted up. You’ve got to hand it to the Windows operating system. It really takes its time to make sure it gets everything in the booting-up process just right. And if it doesn’t, which it doesn’t, it starts all over again to give it another valiant CPU-melting try.

In the end, the computer just wasn’t powerful enough to handle the intense demands of my day-to-day professional computing needs, so I gave it to my son who uses it exclusively to watch videos of other people playing a video game called Fortnite for upwards of 23 hours a day. Which reminds me that I need to slide some food under his bedroom door. I’ll be right back.

For myself, I purchased an Apple MacBook Pro which is like a Windows PC but a hell of a lot snootier, more expensive and – here’s a key selling point – actually works. Now, I’m not one to get in on the Mac VS Windows PC debate. People prefer each operating system for their own personal reasons even if those reasons lead to them owning terribly inferior Windows PCs. I am certainly not one to go around judging simple, slow-witted Windows PC users.

Never-the-less, even shiny new MacBooks that cost roughly the same as major NASA projects are prone to stop functioning properly if you accidentally throw your mouse across the room hitting the screen and shattering it into several hundred pieces, which is exactly what I did. I had been walking out of my office one day when I realized I still had my mouse in my hand, so I tossed it ever-so-gently toward my desk where it ever-so-gently hit my MacBook’s screen and ever-so-gently destroyed it. So, I found myself having to temporarily re-acquire my son’s laptop for work while waiting for my MacBook’s new screen to come in, which is how I ended up trying to upgrade the hard drive in my son’s computer to, hopefully, squeeze a few more computer speed units (or CSUs) out of it.

My plan was to swap the typical “old fashioned” hard drive, which utilized spinning disks to store and retrieve data just like an old Victrola record player and with just about the same amount of speed, with a state-of-the art SSD drive. SSD is a hi-tech acronym for “Solid State Drive” which makes saying “SSD drive” totally redundant and yet I can’t stop referring to it in that way or manner. Long story short, thanks to the laptop’s body apparently being welded together with some hitherto unknown plastic alloy that cannot be penetrated and screws smaller than purely theoretical particles, the entire endeavor proved to be an impossible, expletive-generating nightmare that, I’m not kidding, almost resulted in me leaving my family in the dead of night, changing my name, and adopting the life of a wandering shoe shine, which in retrospect seems a bit extreme.

Ultimately, I gave up on the project, fashioned the remaining pieces of my son’s laptop back into a vaguely laptop-looking shape (minus a few microscopic screws that probably ended up in my bloodstream somehow) and just waited until my MacBook was repaired. If there’s one lesson that I can take away from this entire experience it’s that The Godfather Part III is a terrible movie.