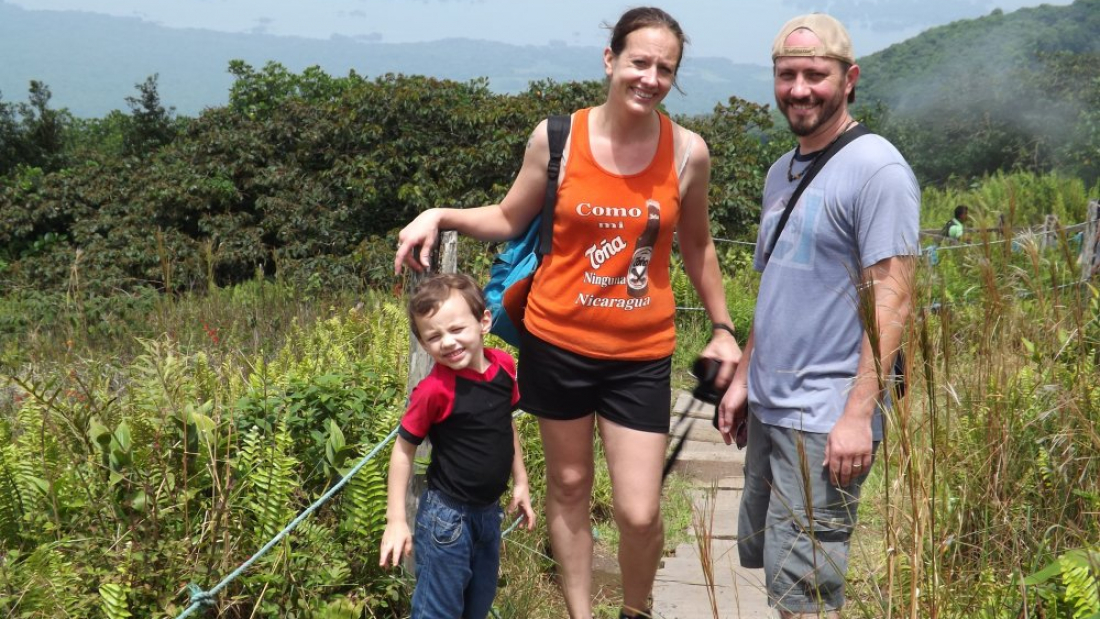 Read the story below the gallery…

We left at 8:00am this morning to hike the Mombacho Volcano. Our guide had two options. One for $35 per person that would drive you to the top of the volcano in a truck so you could walk trails around the craters and another for $30 where you could hike from the bottom of the volcano.

Roberta and I had a short battle on which one to take, her wanting to do the hike up the volcano, me wanting to take the drive. My reasoning was…a volcano is steep…the road is three miles long…and we have a 4-year-old. She said, but we’ll miss SO much if we drive…if he gets tired I’ll carry him. I said deal…we’ll walk, you carry.

Well apparently she didn’t count on the road being a constant 45 degree incline (at best) of moss covered cobblestones in dense jungle. This three miles was the absolute – no joke – worst thing we’ve ever done in our lives. It was like the Bataan Death March except worse. Or course, Levi loved it and had a great time. He actually got along pretty well and didn’t need carrying all that much and barely complained until about the last 15 minutes of the 4 hour hike. Yes…it took 4 hours to walk 3 miles. This shit was BRUTAL. Of course, for our guide, Alex, it was nothing. And he was a life saver. He even carried Levi more than a few times!

There was a stop a little over halfway up at the Cafe Las Flores coffee plantation where we got to relax, have some free coffee and catch our breaths. Then it was straight back into hell on earth for another 45 minutes straight up until we made it to the top of Mombacho. By this point I was thinking about just jumping into the first volcano crater I saw to end the pain, but my leg muscles lacked the strength. I should have had Alex to throw me in.

However, after a short 20 minute rest we were able to take the crater tour which was well worth the previous nightmare and much more level, geographically speaking. Alex took us through all these super cool jungle pathways and we had a great time. At one point we stopped and Alex whipped out several bananas, dragon fruit, mangos, and oranges from his backpack and sliced us up a little fruit salad.

We DID NOT walk back down the volcano! Alex pulled some strings and got us all on an outbound truck for $20.

Needless to say, Alex and Levi totally hit it off. We also got to see and hear a few howler monkeys. Just so you know, howler monkeys sound absolutely fucking terrifying, but they are very cute.

Hey! Be sure to check out my new website all about living in Granada, Nicaragua Gringo in Granada!