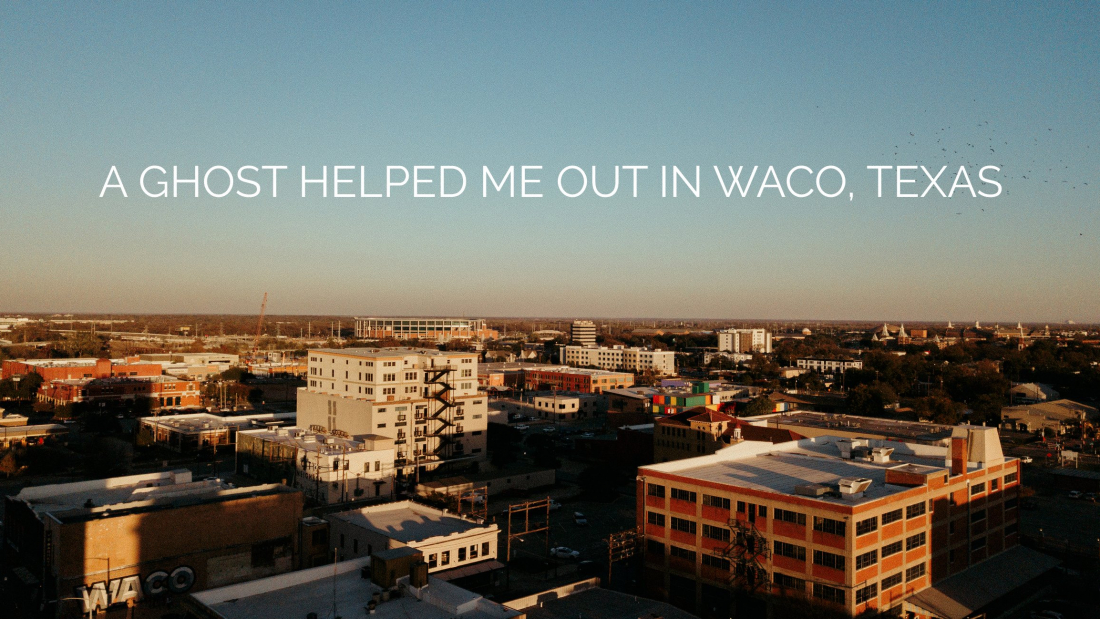 I got lost with my girlfriend one night in Waco, Texas. Roads were deserted. No people. No cars. Then a ghost helped me find my way.

This was around 2003 or so. My band Plow Monday had a gig at a venue in Waco I now can’t remember the name of. The venue was a two-story stone building with a performance stage and bar on the second floor. It was not very far off Interstate 35. Perhaps two turns at most: a left off the highway, through a few lights, then another left, and there it was. Easy to find one’s way there and, presumably, easy to find one’s way back from.

We were one of the openers, essentially played for no one, and were off stage early in the evening. My girlfriend and I hung out for a while to take advantage of our two free drink tickets but being too broke to buy more drinks at the bar, we left early and headed home. It was dark, but not late. Maybe 9:00 pm.

Despite the venue only being two turns from the highway, we immediately got lost on our way back, which seemed incredibly odd and improbable. Again, we’d only had one beer each. We were not drunk or mentally compromised in any way. Stranger still, the roads and sidewalks were entirely deserted. There were no people and no cars, which was pretty strange for a rather large city on what was then a relatively early Thursday evening. We drove on, taking turn after turn, trying to get back to the Interstate and seeing no cars or people the entire time. No turn led us to the highway or even put it in sight. It seemed and felt as if we’d entered some strange alternate reality.

Then as I made yet another turn, I saw one lone person standing on the corner across the intersection. This was the first person we’d seen since leaving the venue. As I made a left through the intersection heard a friendly male voice – in the vehicle – as if sitting in the back seat, say to me, “You’re going the wrong way.” I noticed I was, indeed, going the wrong way on a one-way street so I did a U-turn, but I had also been going the wrong way toward the highway. As I completed the U-turn, I saw Interstate 35 directly in front of us a few intersections ahead. I absentmindedly said, “Thanks,” to the disembodied voice in the back seat as I completed the U-turn and headed for the highway. It wasn’t until a few seconds later that it hit me. I had heard a male voice in my back seat tell me I was going the wrong way and I thanked it as if this was entirely normal. Once we were on the highway, I asked my girlfriend a bit later if she had heard the voice too and she burst into tears because she had been so freaked out by it, she thought she was going insane.